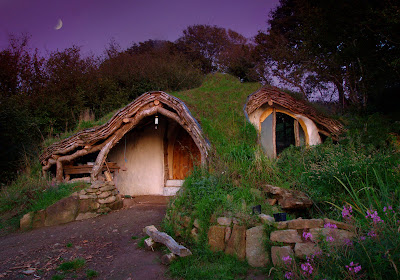 This is a house built by Simon Dale and his family. He lived in it when it was first built, but has since passed it onto someone else. I actually don't like the phase 'Hobbit House' but I guess many people can relate to it (or scenes from the film) - the key difference is that this isn't something make-believe from a film set, this really is a house people live in and it's truely sustainable.
Simon built the house largely from things around the land - large oak branches (in the round, complete with bark and Ivy on), cob (a mixture of clay, sand, chopped straw and water) and rocks, along with recycled 'junk'. The end result is both beautiful and has very little impact on the land - in fact at the end of it's life, it will gently fall back into the ground from whence it came. You might think that's a waste, but it only cost about £3000 to build.
Of course there is some modern, non-renewable stuff in there - the waterproof membrane which stops the turf roof leaking etc, but compared to 'regular' houses, this one has the very greenest credentials of them all.
Simon admits to making a few mistakes along the way - he left the bark on the posts and beams, but later found insects were colonising them, and there's no toilet or bathroom facilities in this small house (they used their next-door neighbours), but unless you make the mistakes, you don't learn to do it better next time.
The beauty of Simon's house is that it connects with the soul, with something deep inside that makes it look and feel 'just right'. It might look like it's come from the latest science fantasy film set, but it's a real and practical solution to housing that I think we'll start to see in greater numbers.
But could you live in a house like this? I actually think very few people would be able to cope because along with the low-impact house, goes a low-impact lifestyle - no 'on-tap' hot water, no mains electricity (all 12 volt solar stuff), so you'd have to fundamentally shift your lifestyle in order to adapt and be happy with the house. Me, I'd love to give it go!
Check out Simon's website for further information and more glorious photos:
http://www.simondale.net/house/

Foraging for Wild Edible Plants - Print Your Own Pocket Handbook 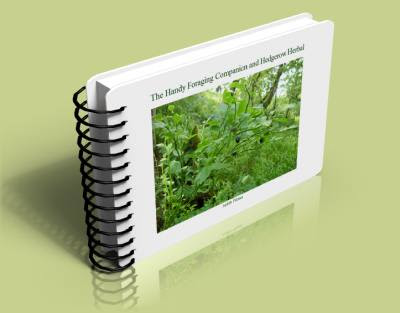 If you're anything like me, do you walk through the lanes, pathways and woods and see the lush green growth that nature has provided, and wonder what plants you can eat or might be useful in some other way? The answer comes in the form of this handy and inexpensive downloadable guide that you can print yourself - The Handy Foraging Companion and Hedgerow Herbal from 'Judy of the Woods'.

This latest version of The Handy Foraging Companion And Hedgerow Herbal comes in a portable post card size. The downloadable and easy to print feature-laden guide contains a list of over 350 edible plants in a handy format, as well as detailed illustrated profiles on over 50 common edible plants of Britain and Northern Europe.


I purchased the previous version of this guide about 9 months ago and can confirm that it is totally packed full of useful information. The only gripe I had was that printing it double-sided took a little bit of working out, but the current version is designed as postcard-sized and single-sided - so much easier. -Martin


Whether you forage on a leisurely weekend walk, want to know if that weed in the garden has some use, or want to prepare for a potential survival situation, this guide is one of the handiest reference books on foraging. It is designed for quick access to all the essential information you want at your fingertips. No more wading through long text to find the facts you are looking for.

This unique, compact guide packs a lot of information into a small space: