What would it take for you to act?

One of the issues that I'm exploring and reading about currently, is what would someone do when presented with a fact or concept that they totally accepted, but in doing so, it then exposes a hypocrasy within their current way of life? In other words, what is a person's 'tipping point'? 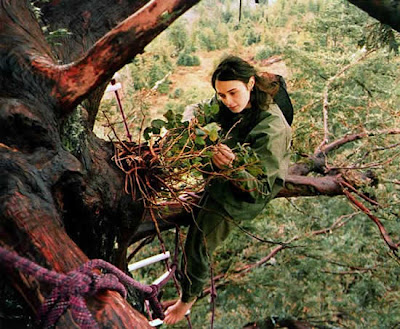 In a previous article, I included a video showing Julia Butterfly Hill talking about Disposability Consciousness, and since then, I've discovered that for 738 days between December 10, 1997 and December 18, 1999, Julia Butterfly Hill lived in the canopy of an ancient redwood tree, called Luna, to help make the world aware of the plight of ancient forests and deforestation.

Luna was over 1,000 years old and 200 ft tall. “When I entered the majestic cathedral of the redwood forest for the first time, my spirit knew it had found what it was searching for. I dropped to my knees and began to cry because I was so overwhelmed by the wisdom, energy and spirituality housed in this holiest of temples.”

Clearly, she had reached her own personal tipping point and felt compelled to act.
Written by Hawthorn at 23:35

What a wonderful, wonderful human being. Thank you for bringing her to my attention.

You're welcome. It's heartwarming indeed to discover that the world has people who deeply care about the environment and who act on that care rather than just signing a petition or 'liking' a Facebook page (although these actions also have their place).