Hidden communities - the Hutters of Carbeth

Please read the update at the end :-)

Because the British Isles is a relatively small place and over developed (from the point of view of buildings, both commercial and domestic), you don't expect that there are many 'hidden' communities. Those out there are often fighting with the authorities or land-owners for survival. One such place is called 'Carbeth' in Scotland and it was originally set up in 1920, but really came into its own just after the WW2 when it became an 'escape' for some of the people of war-torn Glasgow and Clydebank. 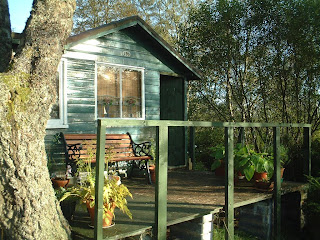 A few years ago, the 'hutters' of Carbeth were being threatened with ridiculous rent rises from the landlord (in Scotland, the vast majority of land is owned by a very small number of wealthy estates) who, it became clear, intended to keep increasing the rents until the people moved off. They were also threatened with violence if they resisted.

This short film gives a little background to the people, their buildings and the struggle, which has resulting in them forming an association with the intention of buying the land to preserve their future.

Whilst some of the huts are very 'Heath Robinson' each is beautiful in its own way! The setting looks fantastic - what a wonderful place to live!

Update!!!
In 2013, the community of hutters at Carbeth managed to purchase the land through protracted negotiations with the land owner - their future is now secure!
Written by Hawthorn at 11:34