The task was to... "Map all the hawthorn and elder trees within a mile of where you live. This means going out and locating them and drawing a map showing where they all are. Notice where they are growing in relation to roads etc and see which ones would be suitable for you to harvest from them. Try to do a bark rubbing from several trees of each genre and see how similar/diverse they are. Label and date the bark rubbings. Take photos and notice the shape of the trees."

My ‘Collins Nature Guide – Trees’ described elder as a “member of the honeysuckle family, a broad-crowned deciduous shrub or small tree up to 10m tall with a rather twisted growth and arching branches”.

I found elder quite easy to identify, having searched for elderberries last autumn and photographing some at the Sanctuary in late 2008. In the winter, it can be identified (in some cases) through its habit of pale-grey coloured upright stems coming off the more horizontal branches.

The other key identifier for elder is the bark itself, which is covered in small warts or bumps, known as lenticels. The density or amount of these lenticels seems to vary between trees. The bark of the main trunk is quite different from that of the smaller shoots, being a darker grey-brown with longitudinal furrows.

The other identifier that I used on elder was to snap one of the twigs and look at the cross-section. Elder has a very pithy core which can be easily seen.

Hawthorn is a member of the rose family and since the 1800’s has been commonly used for hedging fields and boundaries. In mid-winter, it’s slightly trickier to identify than elder.

The bark on the smaller branches is smooth and light green in colour with a little fleck in it. The giveaway is the thorn and the occasional shrivelled haw that is still on the tree from the autumn. In the spring, summer and autumn, the hawthorn is easy to spot with its distinctive leaves and white flowers (esp. in May, hence it’s folk name – the ‘May Tree’).

Above is quite a tall local hawthorn enjoying the close company of an ivy.

Above - some of the smaller branches of hawthorn with their smooth bark. 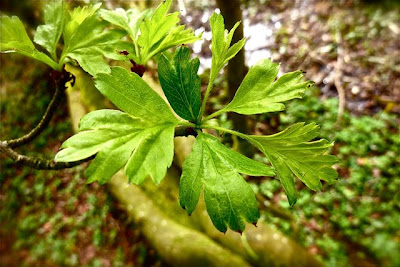 Above - Hawthorn leaves in late spring.

The task... Make an elder bark oil/salve. This means you need to collect some elder twigs. Choose a tree in a unpolluted spot. Cut some twigs and when you get them home, strip off the bark. Divide the bark shavings into two piles and make a double infused oil.

Elder is regarded as a very sacred tree, so before cutting/collecting twigs one should try to get a feeling if this is Ok with the tree or not, and of course, always ask the tree for permission first! I cut the twigs into similar lengths and using a penknife, was easily able to remove the bark. 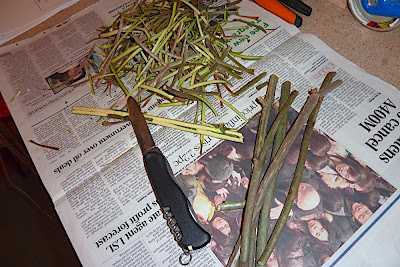 Elder twigs (foreground) and bark behind.

Once all the bark was stripped, I split it into two piles for the double-infusion. The first pile was placed in a pan, and I poured on enough vegetable oil to just cover the bark. This pan was then placed in a larger pan of hot water to make a double-boiler (you can buy proper pans that do this, but a) I haven’t found any locally and b) I suspect they’ll be quite expensive. The pan-in-water or double-boiler is used to ensure a gentle heat is applied to the oil so it doesn’t burn. 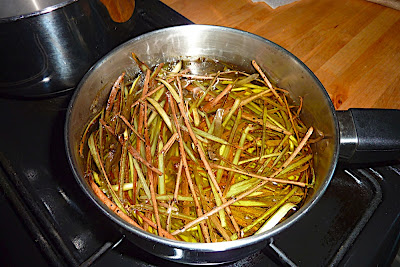 Keeping an eye on the water level (and topping up where necessary), the oil and bark are heated and infused for two hours.

The oil and bark are now carefully poured through a sieve into a bowl and the bark thoroughly pressed to extract as much oil as possible. The bark left in the sieve can be disposed of (not sure if this would be any use on a compost heap or not?). 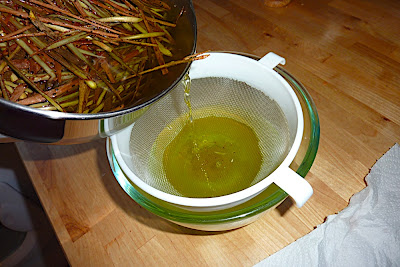 Then I added the second pile of bark into the original pan and poured the single-infused oil over the fresh bark and returned that to the heat of the double-boiler for another two hours.

After the two hours, I again poured the oil through the sieve and collected the double-infused oil. The oil was initially quite cloudy and had a strong greenish tint to it, but over the course of the next few hours, the colour changed slightly as did the cloudiness, leaving a pale yellowy greeny translucent oil. 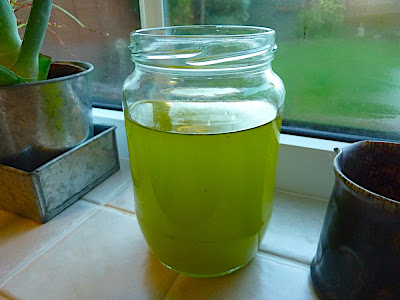 In notes from a previous event I’ve been on, Sarah Head has mentioned that oils made with fresh plant material should be left for a few days to allow moisture to settle out, after which time, it can be decanted and bottled. My elder bark oil had a lot of whitish small strands/flecks, which eventually settled down – I assume these were some of the pith from the underside of the bark. 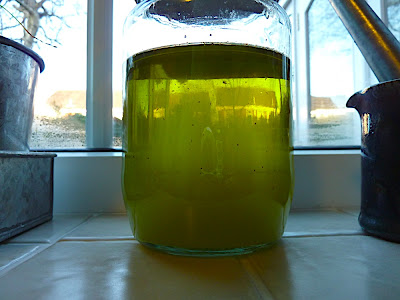 I intend to make a salve from the oil, which is much more convenient and less messy in daily use. Having said that, I’ve not had any bruises yet so have been unable to test the oil for effectiveness.

I found references on the internet that elder bark is a liver stimulant, purgative, emetic (large doses), diuretic, topically emollient[1].


Other herbs for bruises

My main herb books mention the following as being suitable for use on bruises…
The DK Pocket Encyclopedia - Herbs, mentions that comfrey oil or a poultice of comfrey leaves will reduce bruising, and that a lotion of St John’s wort and arnica are excellent for sprains and bruises, especially if there is any pain or inflammation. An ointment of calendula petals, agrimony or elder leaves is soothing and healing for bruises, sprains and other minor wounds. It notes not to use arnica where the skin is broken.

The general consensus from searching the internet is that the top two herbs for bruises are arnica and comfrey. I’ve also heard anecdotal evidence on the effectiveness of Yarrow, simply crushed/bruised and left in contact with the affected area of skin for several hours.

What might you apply to a bruise using these other herbs that you would not (preferably) use with elder and why?

Well this had me stumped! I was looking perhaps for too complicated an answer and the obvious one was actually right in front of me. During the research into elder, there were plenty of warnings about ingesting it and the effects it can have (see notes above -  'elder bark is a liver stimulant, purgative, emetic, diuretic').

Sarah gave the answer as 'Elder bark and leaves are emetic (can cause vomiting) if swallowed. Most other herbs which are good for bruises would be administered in the field using a spit poultice (i.e. you chew up the leaves and apply them to the bruise). You wouldn’t want to make a spit poultice from elder leaves in case it made you sick!'


What is the body doing when a bruise is formed?

Look at the structure of the skin and the underlying blood supply and map the formation and healing process of a bruise.

The next question I would ask, which is probably a step too far at the moment, is what is the elder bark oil (or any of the other herbs noted) doing to help brusing?

Hello Martin, thank you for sharing your journey with elder bark! I didn't know anything about it and really enjoyed the pictures, descriptions and research in your post. Best wishes, Elizabeth

Hi Elizabeth - thanks for your comments. Sarah is working us hard, but it's incredibly rewarding!